After spending the afternoon at Narara, we headed for Jamnagar where we based ourselves for the next two days. That evening we headed straight to the Lakhota Lake in the centre of Jamnagar where we hoped to see the at times 10,000 strong flocks of rosy starlings that come in to roost in the trees surrounding the lake. Not only did we see that astounding scene, we realized there must be at least 500 to 700 gulls also which nest there… not to mention the other birds which we couldn't count. It was already dusk then. The numbers are INCREDIBLE to put it mildly. 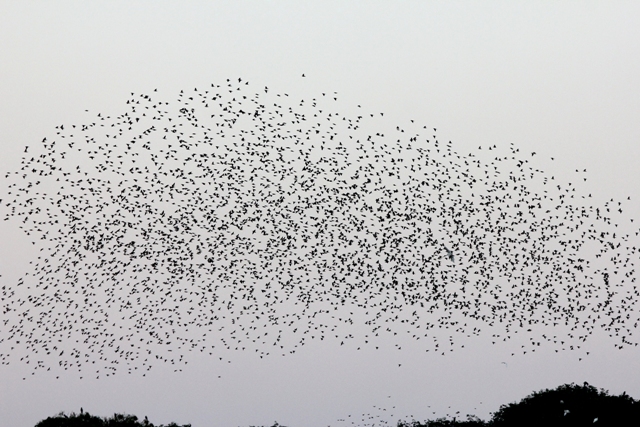 The next morning saw us on Valsura road and further on to the road going to rozy port. All along the road on either side were salt pans full of birds…. Flamingoes, godwits, plovers, avocets, sandpipers… the list is unending! It is here that we also chanced upon the three thick knees of our trip.

The salt pans are massive and at the very far end, we were told that crab plovers could be spotted. So off we went fairly uncertain about the route since we had only a vague idea of the location. Finally after almost rally-like driving through dirt roads and onto bunds which were barely wide enough for the car, we finally spotted a flock of white a long way off. We practically crept towards the birds since they are known to be very skittish. It was a glorious sight that met our eyes. Every last bit of effort was worth it since we saw the most amazing birds there…. I’ll let the pics do the talking!

Totally satisfying and fulfilling trip to this amazing paradise for birds and bird-lovers alike!!